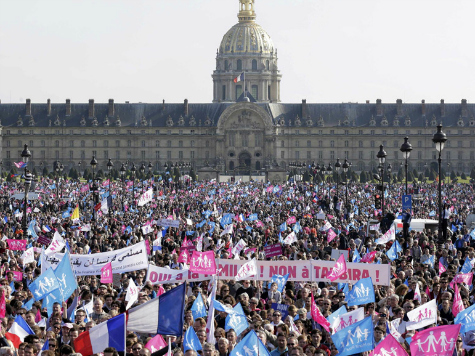 Left-wing and mainstream media are slowly catching on there’s something happening in Europe, with a rapidly growing conservative movement that looks an awful lot like the same movement here.

This was true exponentially for BuzzFeed’s Lester Feder, who was hired last year to cover the global LGBT movement. Rather quickly Feder discovered a highly organized global coalition of conservatives working in opposition to the sexual left.

For his 3,000-word take-out on the rise of the “European religious right,” Feder began:

“On a hot Friday in late June, the walls of a 15th-century marble palace in a secluded corner of the Vatican were lit up with the face of Breitbart News Chairman Steve Bannon.”

After opening a Breitbart London bureau a few months ago, and after hosting five hours of live radio from the Vatican around the Canonization of John Paul II and John XXIII, it made sense that Bannon would be invited by conference organizer Benjamin Harnwell, an old hand at the European Parliament, founder of the Dignitatus Humanae Institute and self-described European Tea Partier.

Piped in by Skype, Bannon told the VIP crowd:

Bannon later admitted a bit of shock that he was speaking directly into the Vatican.

The evidence for the rise of European conservatism is everywhere.

Spaniards were galvanized four years ago when their socialist president liberalized Spain’s abortion laws. More than a million of them marched on Madrid. And then they did it again, and then a few times more just for good measure.

When the Socialist government of France threatened to legalize same-sex marriage, French families took to the streets of Paris a million and a half strong. Like the Spaniards, they did it more than once. Even French gays marched with them. The angry government gassed the protesters, including Christine Boutin, former presidential candidate and Cabinet minister under President Sarkozy.

It’s not just social conservatives on the march. The movement against widespread immigration is years old, very well known, and not particularly conservative anyway. Less well known, however, is that at the time pro-family protesters marched in Paris, farmers in Brittany rioted over high taxes. The remarkable sight of French farmers rioting over high taxes barely blipped in the US media.

Additionally, Edmund Burke Foundations have sprouted in a number of European Capitols. According to Spaniard Jorge Soley, their purpose is to overturn the French Revolution. Soley also founded the Brussels-based pro-life lobbying group European Dignity Watch run by German Sophia Kuby, a group which grew out of a conference of European pro-life leaders run annually by New York and DC-based pro-lifers.

But to put the Madrid and Paris demonstrations into an American perspective: If a proportional crowd marched on Washington, D.C., it would number between 7 and 10 million. Do that even once, let alone several times, and you have the stuff of massive social change and even revolution. Indeed, one member of the French National Assembly has said privately that France is in a pre-revolutionary phase. He says France has never learned how to reform, only revolt.

Besides the rapid growth and influence of domestic groups in the countries of Europe is the development that they have learned how to work across borders, something sorely lacking up to now. The French help the Croats. The Austrians help the Italians. The Irish help the Slovaks. They work together at the European Institutions in Brussels and in other legislative and legal venues. And all of them get together for massive continent wide campaigns.

The groups ran one such campaign that rattled the chandeliers in Brussels. Named “One of Us,” it called for the European Commission to begin a legislative debate to protect the unborn child. One million signatures from the 27 member states of the European Union are needed to trigger an official debate on any topic.

European pro-lifers did it. In fact they gathered close to two million signatures. It was only the second successful initiative since the referendum process was approved a few years ago. The One of Us campaign really shook the paladins in Brussels.

The European coalition of pro-life groups also scuttled something called the Estrella Report, a fairly aggressive pro-abortion document; something desperately wanted by the sexual left that usually gets its way. Not this time, though. The Parliament was flooded with calls and emails from ordinary Europeans and the report was shot down. The campaign smelled remarkably American.

David Quinn, who runs the Iona Institute from Dublin, told Breitbart News that anyone who is surprised by the close cooperation of American and European pro-family groups “simply has not been paying attention.”

Likewise, Ben Harnwell told Breitbart News, “Unlike the radical-militant secularist lobbying organizations, the strength of the pro-life, pro-traditional family movement lies with ‘regular’ people. For years, such people were too busy raising their families and holding down ‘normal’ jobs to lobby government, but now, largely thanks to new social communications means that were unknown a generation ago, everybody can now make their voice heard – and they are doing so!”

While Europeans have learned many American ways of advancing their cause, they have not yet figured out how to turn their massive and active numbers into victories at the ballot box. If ten million Americans marched on Washington, D.C., political fortunes would rise and fall. Laws would change.

The French government went ahead and legalized same-sex marriage. The European Commission looked at the nearly two million signatures of the One of Us campaign, sniffed, and tossed it in the wastebasket. More than a million Spaniards in the street has still not translated into a single electoral victory, though the Parliament is set to tighten back up the abortion laws. The woman who ran the French protests of millions of people has said her movement is not about politics but about prophecy, though she drafted a pro-marriage statement and got a few hundred politicians to sign it.

The European sexual left is obviously worried. They are busy issuing research papers and sounding the general quarters, all hands on deck, to defeat the rabble they thought existed only in the puritanical New World. If recent history in the United States is any indication, they have every reason to worry about the rise of the European religious right.

or sign the Declaration now with your smart phone!

What they say about the DHI…